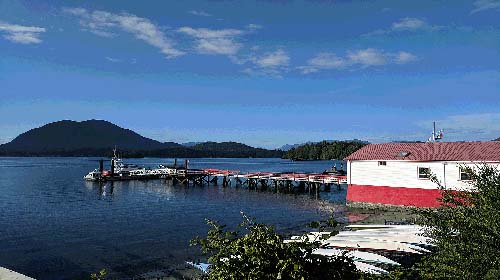 Onward and up
Hiring a Car

We decided to catch the ferry to Vancouver Island from Tsawwassen. I wasn’t looking forward to the journey down from Vancouver because I hadn’t driven an automatic for about 25 years. We checked out of our AirBnB and got a taxi to the airport where we hired the car. This wasn’t as simple as we had anticipated, and quite a bit more expensive, but we ended up with a Ford Taurus, a big blue car that seemed enormous compared to a typical UK vehicle. I warmed to it quicker than I would have guessed — really sophisticated SatNav, along with music, phone, Bluetooth connections, and the rather domineering tones of an American woman (or was it Canadian?) who reads you the riot act before you have even got the car into gear. The drive down to Tsawwassen saw quite heavy traffic, but I felt more in control of the car than I’d expected from my previous efforts with an automatic, when I stopped in the middle of a four lane highway in the US by confusing the brake and the non-existent clutch.

With friends at Tsawwassen

We stayed with friends in a huge, lovely house on the sea, looking out onto the Ferry terminal and the coal loading terminal nearby, and we spent a great time with them talking about travel and the state of the world.

Tsawwassen has a suburban feel but is named after the First Nation people who inhabited before it became a leafy, manicured residential punctuated by shopping malls and golf courses. The ferry is a short drive from the town centre, at the end of a long peninsular that runs past the coal wharves that are still in use.

Our Ferry journey was a bit of a disappointment as it was an over-cast day. The crossing wasn’t ideal in terms of views and photo opportunities, and it was too cold on deck to watch for whales, although I did my best for a quarter of an hour before retreating inside. We spent some of the trip chatting with an Indian couple who were living in Seattle, and had come up for the long weekend.

The ferry costs about C$120 from Tsawwassen to Nanaimo. It’s best to have a reservation, which costs C$20 to make, and then you pay the balance when you turn up for the voyage. The ferry itself is very comfortable, with plenty of places to sit and lounge about, and a good restaurant doing all the usual basic meals but also delicious icecream.

Within a few minutes of arriving at Nanaimo, we noticed a sign for an ancient site with petroglyphs. We almost missed the turn off from the main road, and we were the only visitors. The petroglyphs are mysterious, lightly carved in the rocks under a sanctuary of trees, and sadly spoiled by modern graffiti. A sign at the entrance explains the significance of the site and the main images depicted in the petroglyphs.

Nanaimo had a rather slow pace, it felt almost worn out rather than laid back. We initially missed the town altogether, by walking down to the extensive marina, and when we did locate it, there was a definite feeling of lassitude. The boat in the harbour that has, apparently, the best Fish & Chips ever was shut for renovation to refit it for compliance with fire regulations, so we walked up into the main area of town, then down from the centre along a kind of High Street that had a fantastic second-hand bookshop with an extensive collection of tomes related to the First Nations and Vancouver Island. There were about half a dozen books I would have loved to have bought, including a coffee table sized book on Eskimo Art, and it was only with the utmost restraint that I was able to not buy it. The town also has loads of charmless and faceless shopping malls dotted about the place, a real feature of north American life which has sadly spread to Britain.

When we were in Nanaimo, a rather grumpy drunk-looking person called after us after I briefly met his eye, and I am sure that alcoholism and drug problems abound; indeed, I know that for certain, because it was mentioned several times at the First Nation panels at the conference in Vancouver. I would love to find out more about the First Nation peoples who live around here, and the kinds of challenges they face.

Nanaimo is home to a large Chinese community. The cultural differences were there in the B & B which was comfortable, but rather spartan. It was run by a friendly Chinese guy and his family and, although everything was pleasant with lovely views across the ocean, it had a slightly functional feel to it, lacking aesthetic appeal. As we approached the front door the lovely acer was shrouded in a metal wire jacket – we were not sure of its purpose but the beauty of the acer was lost in it. Also, in the apartment itself there were industrial size bottles of shampoo in the bathroom, as well as large tins of coffee and tea in the kitchen, all beautifully and clearly labelled. Helpful but hardly charming or appealing!

It was raining when we set off from Nanaimo for the drive to Tofino. We decided to stop for breakfast en route to see if the rain would clear away, and we had been told that a village called Coombs would be interesting, mainly because it supposedly had a building with goats on the roof.

It was a strange concept and the ‘town’ itself proved to be very strange indeed. Firstly, there were no goats to be seen. Perhaps it was the rain, but we wondered about aimlessly trying to find them, and they remained hidden. Secondly there was no town centre but merely a cluster of odd- looking buildings, which appeared to be remnants from a fairground left behind inadvertently. Finally, we looed around the main store which had a plethora of foodstuffs, including Saskatoon Jelly, and a big range of Maple Syrups of different hues and intensities. It was essentially a supermarket, but built from wood, an odd mix of the charming and banal.

It was puzzling, the more so because a number of people had stopped there and it was quite busy with tourists. We couldn’t help wondering why anyone would bother to go there and if they did, why would they ever recommend it to anyone else?

We ended up having a grilled cheese sandwich at a small café in lieu of breakfast.

Shortly after, we found the forest of Giant Redwoods that are known as Cathedral Grove. This was a stunning place, mystical and atmospheric, full of ancient trees, the oldest of which were 800 years old, douglas firs, hemlock and redwood pines.

We walked a short trail through the forest of trees, the air misty and heavy with rain. The widest of the trees are 10-12 feet in diameter, and they rise up around 300 feet to the forest canopy. It really does feel like being in a cathedral, although the tree trunks have a reddish brown colour rather than the grey stone of a cathedral. But the same reverent silence hangs over the place, and you have a real sense of awe.

Without exception, everyone has their selfie taken in front of the largest tree; we certainly didn’t break the mold.

The journey to Tofino was beautiful, with mountains and lakes and a general sense of peace growing as we got further away from Nanaimo and nearer to the ocean. The mid part of Vancouver Island consists of snow-capped mountains, and we then followed the path of the Ellis River, stopping off on the way at a rocky outcrop where the river becomes a series of fast-rushing waterfalls, with the snow-capped mountains behind.

We reached Tofino around 4 pm and checked into our seaside cottage which was absolutely lovely — a small but very cosy cabin with bedroom, living room and kitchen, set in a beautiful garden. The cabin is just the other side of the road from Chesterman beach. Ideal, and only 10 minutes or so from the centre of Tofino, so it was really perfect after a long drive through the mountains.

At first I mistook the barbecue for a light truck or maybe something like a golf trolley, and it does seem to be a feature of Canadian life that you have a large gas-fired barbie so thank goodness for LNG. There are also very large propane cylinders behind some of the restaurants, so I imagine that LPG is a significant industry here. From what I have heard it is all controlled by just 5-6 companies acting as a quasi-cartel.

The villa at Tofino is one of the nicest places we have stayed, especially the proximity to the ocean which you can hear as you fall asleep. The air here feels clean and fully oxygenated what with the ocean spray and all the rainforest and trees creating a clean freshness I have never experienced before.