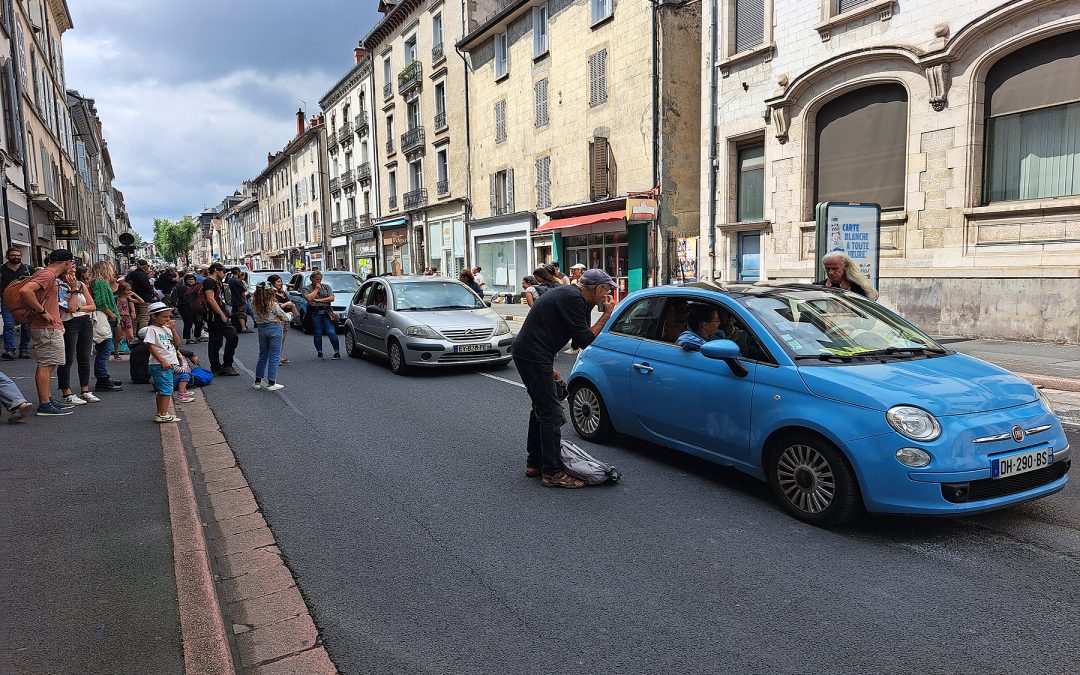 Next day, we went into Aurillac for the annual festival, full of “punks with dogs” which was basically right, although “hippies” would have been a better word. There is lots of street theatre, and lots of New Agey stalls or pavement pitches selling psychedelic art and joss sticks. We looked for a parking space for about half an hour before getting lucky with a place above the railway station, then walked down to meet up with Guy’s friends from Grenoble, also his neighbours. The whole family turned out to be lovely, and we had a great lunch at Brasserie d’Aurillac, which is right in the heart of the town, near the old church.

The whole historic centre was cordoned off and the only cars (in a line down the middle of the street) turned out to have been brought in specially as a street theatre Act about a traffic jam, with families shouting at each other or canoodling in the backs of the cars, a brilliant idea.

The only other time we stopped in Aurillac was not memorable. We have also gone through several times in the car, and always taken a wrong turning, usually leading to a sharp altercation with the SatNav. This time, we got a better sense of the town, which has an odd old church from the 16th century, although we didn’t get to see much else because of lunch.

This was excellent. (Beetroot salad, Pork with a piquant sauce made from Gherkins, for about 20 Euros each) and even though we saw not that much of the city, it seemed a lot more friendly and welcoming than when we first went there to shop at one of the supermarkets on the outskirts, and it all seemed very run down and grim. We will definitely go back when the festival is not on!

We left Aurillac around 3 pm and drove further down South.