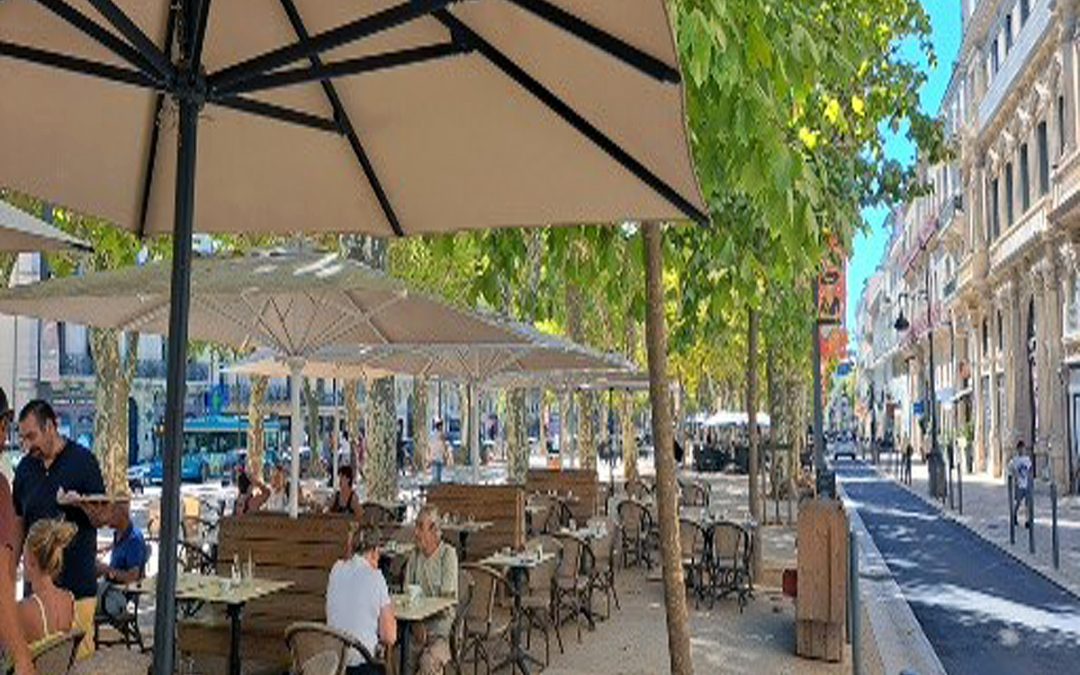 We collected Luke from Beziers, after he had spent a couple of weeks as a scullion (or as he was told, un bras casse) in a sumptuous chateau in the Dordogne. We had met earlier in the day with Dan and Freya, which has become a fairly regular event, always very pleasant.

Beziers is a beautiful city. We hadn’t been there since fleeing from the floods in February when the kids were young. This time, we parked at Place Jean Jaures, and met up with Dan and Freya at Le Mathi’s – a chic but busy café / restaurant on Avenue Paul Riquet, Beziers’ equivalent of the Champs Elysees. We had a good lunch, Omelette and Tomato Salad, nothing special on the food front but not too expensive despite the central location.

I have started doing Google reviews using my easywheeling gmail and it’s really weird seeing how people project their expectations as fact. From some of the Mathi’s reviews, you’d think they were charging Le Gavroche prices! Anyway, it was fine, and we went on for a brief tour of the centre, past Les Halles, briefly into the Cathedral, and a quick glance at the nearby church where 8,000 Cathars were massacred by Simon de Montfort.

Both Freya and Dan are interested in the Cathars (last year we met them at Minerve) and Freya often quotes the famous saying by de Montfort: “Kill them all, God will take care of his own”. Anyway, definitely we will try Beziers again, and give it a longer look. Also hoping to meet Dan and Freya again next week at Pezenas or on the coast.

Well, we retrieved the car from the underground parking at Place Jean Jaures, much cheaper than the street parking.

The Place Jean Jaures is quite weird, with toperie sculptures of animals and vehicles, artworks that ressemble Louise Bourgeois sculptures, but made from thin plastic tubes that make them look far less sinister and more innocuous, but also somehow very plasticky, and the only thing I actually liked (although the toperie and tubes are naff rather than unpleasant) was the stream that goes through the park. This consists of shallow rectangular pools linked to one another, and it gave me a very relaxing feel.