Dreux: Not exactly Paris, but not far off 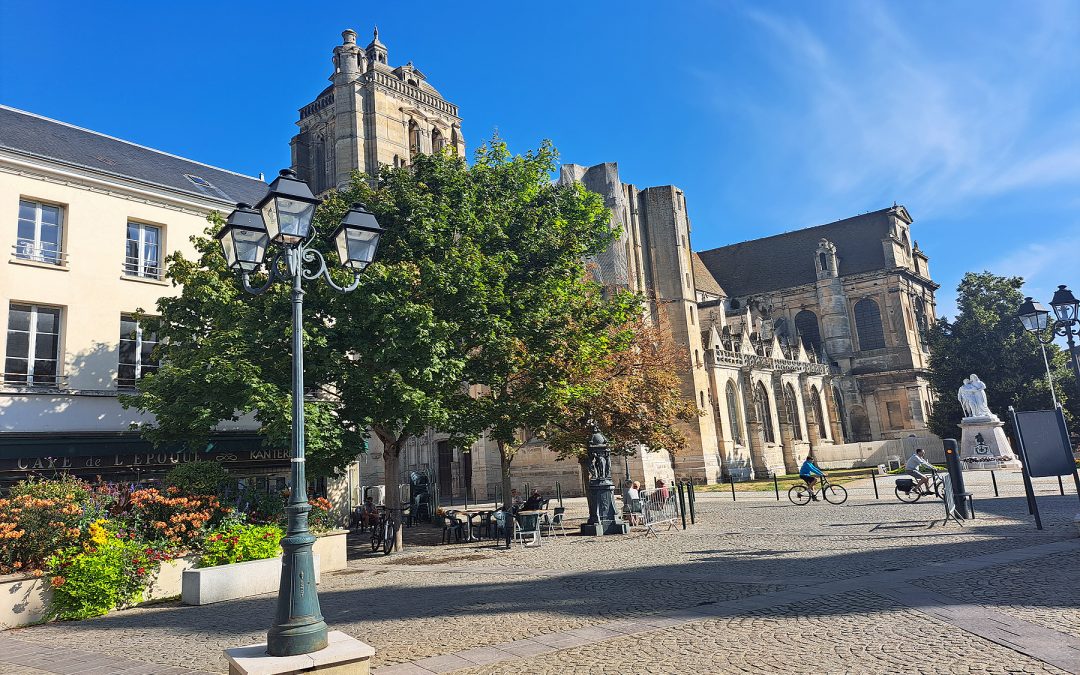 We arrived in Dreux around 6.30 p.m. We booked Hotel Beffrroi en route, which turned out to be a fine place, lovely staff, a comfortable room, albeit with the usual flimsy furniture, but good WiFi and a clean bathroom and a shower that worked. Our room overlooked the river that runs through the town, the Blaise. It was also right in the center of town, with an underground car park immediately opposite that cost us € 11 for the whole period between when we arrived and when we left next day around 11 am.

Dreux itself was an odd little place, full of half-timbered buildings, in atmosphere a bit like Beaunes in Bourgogne, although less well-heeled. It is about an hour our of Paris, but at the opposite extreme in terms of activity; almost all the restaurants were shut, as were many of the shops next day, which was a surprise given that it was the week before the Seizieme when everyone goes back to work en masse. My guess is that it’s so near Paris that it’s more a commuter town and not a lot of people go to it for their holidays. A friend said it was the first town in France to be elect a National Front mayor (in the early 1980s); we were struck by the number of people from ethnic minority backgrounds; I would guess 75% of the entire town population. The women managing the hotel were charming and helpful, and they served us breakfast on the terrasse in the morning, even offering scrambled eggs so it was a good experience.

With so many places shut, we ended up at a small restaurant just outside the center, O Saveurs d’ici et d’ailleurs. What a wonderful name! There was one very calm waitress serving the whole place, completely unflappable. She reminded me of Anna Soubry. We both had terrine and then bavette steak, not the most imaginative of meals, but it hit the spot and it went down well with a demi litre of rose and then a demi litre of red wine.

After that, more or less straight to bed, although there were one or two places open for drinks that seemed buzzing, and it would be good to try them next time. The meal came to around €50 and breakfast the next day was € 11 each, so not expensive. After we had eaten and checked out of the hotel, we looked quickly around the Church, then spent a bit more time in the bakery and then the well-stocked bookshop.

The church in Dreux is Eglise Saint Pierre and has beautiful stained glass windows and a lovely spiritual atmosphere. I wondered if it might have a labyrinth like nearby Chartres, but apparently not.