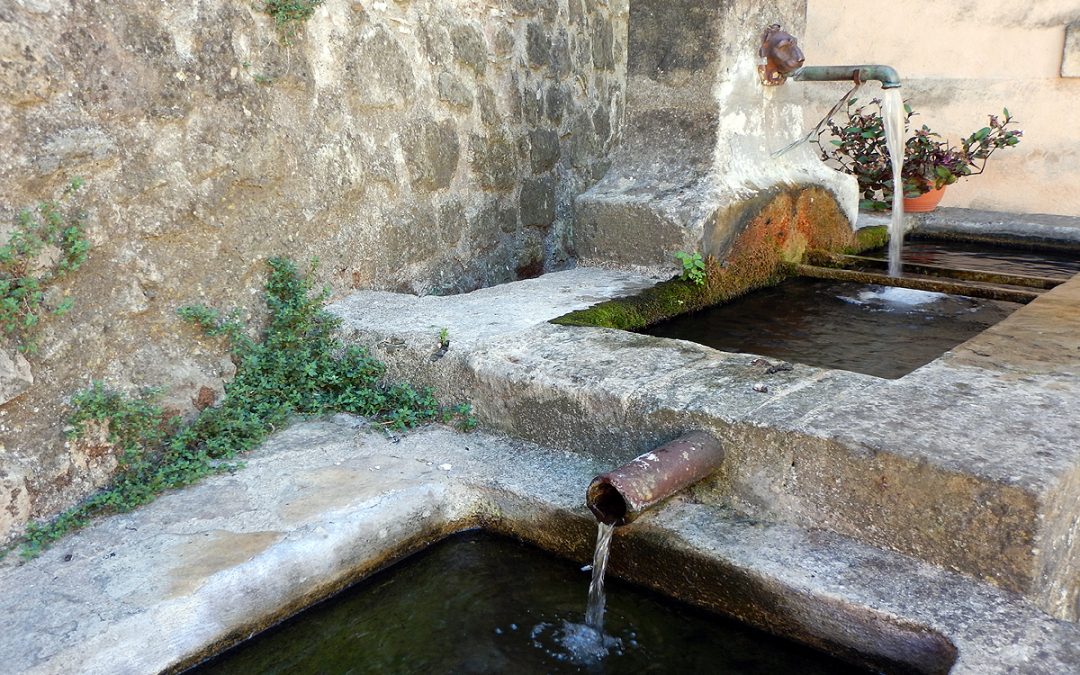 We had a day exploring the countryside around Lodeve. First, we drove out behind the motorway in the direction  of Poujols and Pegairolles, then turned left towards Lauroux.

Lauroux turned out to be very sleepy and beautiful, with two small rivers meeting after the bridge behind the church. We followed the stream down to some allotments but couldn’t go further because it is Propriete Prive; but there was a fig tree in full fruit with beautiful purple figs, not my favourite fruit to eat but beautiful to the eye.

The church was shut, but the alleys around it were very atmospheric and the petanque area near the car park overlooks the stream. It’s a pretty village, and you can go on various walks up to the Grotte de Clamouse, although some of the trails looked rather difficult.

Next day, le Marche at Lodeve. Again, this is a familiar joy, and holds no surprises. We went each Saturday we were there: first time on our own, then with Luke, and then with Emily. It is one of those comforting routines never ceases to be enjoyable.

This time the market seemed more geared towards tourists than usual, and on our first visit, some of the favourite stalls that sell household nick nacks were conspicuous by their absence. Of course, it may be that the stall holders were on holidays themselves; indeed, when I went back a week or two later, an old French lady was berating a stall holder for not having been available the week before! I went to the tourist office to see what’s on in terms of art exhibitions, and there are some good ones further afield, for example at Ceret (down near Perpignan) where they have an exhibition of Soutine’s paintings.

I bought two books on the history of climate change and climate science, one by Emmanuel de Roy Ladurie which is well-known and uncovers evidence for the climate over the last 1,000 years, not only in France but around the world, using quantitative details such as the dates of harvests. I also got another book which is about the motivation of rulers since the 1400s in ordering research into climate change. This is fascinating, as part of the colonial process was to provide reasons for “taking over” and that was often on the pretext that “the natives” were not making the best of their climate. It reminded me of the myths that have been perpetrated more recently about indigenous groups and settlers.

Well, my purchases apart from that were: basically two pairs of underwear. We then went on the usual Super U shop for basics and some nice wines. We spent a lovely afternoon by the poolside, the weather beautiful but with a strong wind that gets quite blustery.

Sunday morning we went into Lodeve again to buy croissants, bread, and fill the car up with petrol, or rather gazole. The fuel consumption on our Captur is not impressive in town, but the car does very well on the longer journeys, and I am monitoring each fill up to try and come to a realistic estimate of how much fuel it gets through. Afternoon by the poolside again, but I swam 50 lengths as part of a bid to get a bit fitter.

We also did a walk above chemin des Capitelles and the vineyards, the grapes are really big now, and I guess it will be a great vendange. We ended up near a stream that runs from the summit down towards the village.