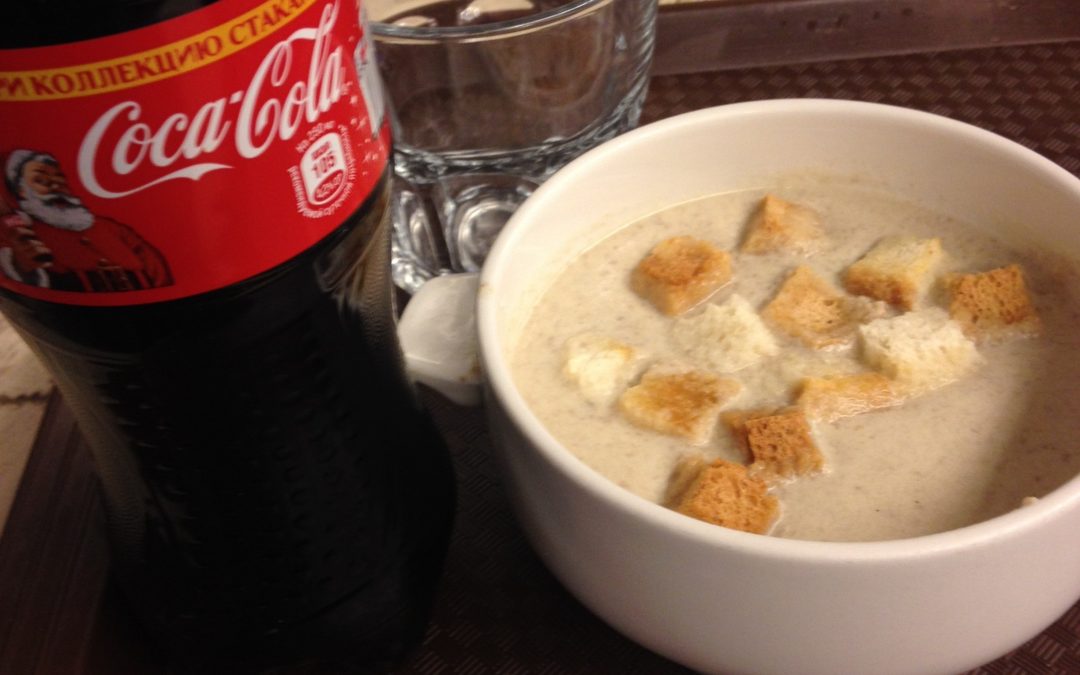 Not for the first time, I am drinking mushroom soup for breakfast on a business trip at the airport in Moscow.

This time it’s at Shermetyevo, the older but recently revamped sister to Domodedevo, where they also do pleasant pre-dawn Borsch and the ultimate comfort food while in transit, Chicken soup with dumplings.

I am in the domestic departure lounge, waiting for a connecting flight to St Petersburg, after an Aeroflot “red eye” flight from Heathrow. The Tsar soup is thick, creamy and flavourful and I have bulked it out with rock hard croutons which dissolved immediately on contact with the piping-hot broth.

I am sitting at a kind of wooden counter, conspicuously not a Russian, as it is autumn and most of the locals are already clutching their winter hats. I am not, and the fact that I am wearing a t-shirt marks me out from the crowd, as no doubt does the book I am clutching, a JK Galbraith tome on the history of economics.

I am keeping a wary eye on gate 15. Above it, there is a sign that claims that Shermetyevo has been voted the best airport in Europe for the second year running. At 5.30 am, before the soup has revived my flagging energy, I find my mind closing in on this claim like a serial killer with a screwdriver. Can it possibly be true, how can it be verified, who has voted?

As I gulp down the soup, I relax. My scepticism reflects my anxiety, waiting for Gate 15 to open, passengers milling around waiting for the same thing, forming opportunistic queues that you know will lose consistency (very like the croutons did) as soon as the gate opens.

Who knows? Perhaps they took the poll on a good day, from passengers who had just tasted the airport soup. Does it matter, anyway?

While waiting for a flight in unfamiliar surroundings, there is a strange feeling of being in limbo. I am drinking the mushroom soup with coca cola, as I did not recognise any of the other beverages, and it seemed indecently early for wine. The cola was a mistake, but in the shifting quicksands between settled time zones, I feel it is a forgivable mistake.

At 5.30 am, it would feel too early even for a full English breakfast; but here, in the waiting lounge, in a permanent twilight zone, it feels like both ends of the day are fused together.