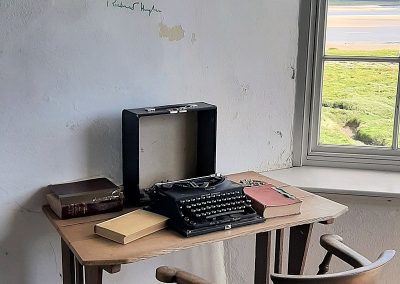 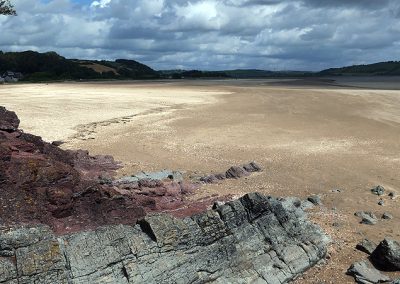 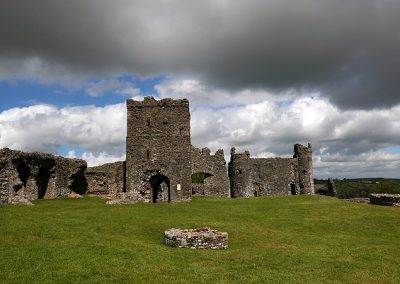 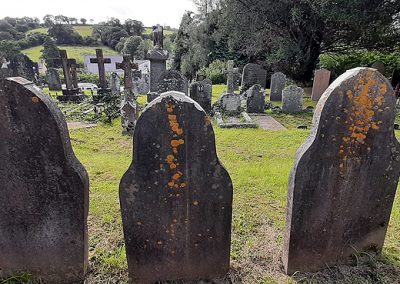 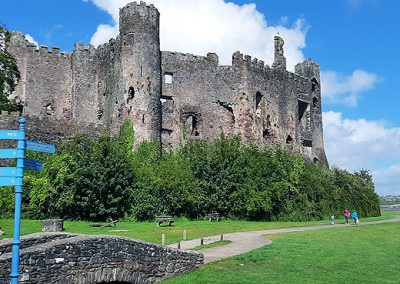 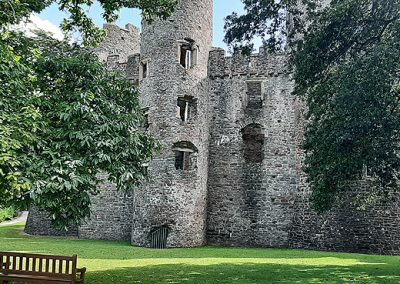 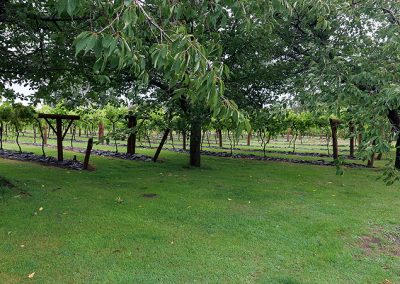 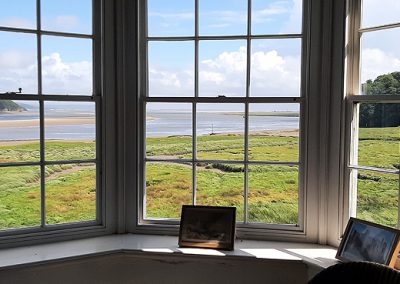 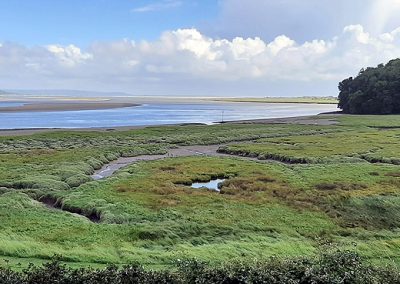 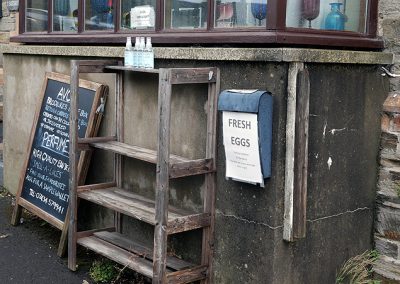 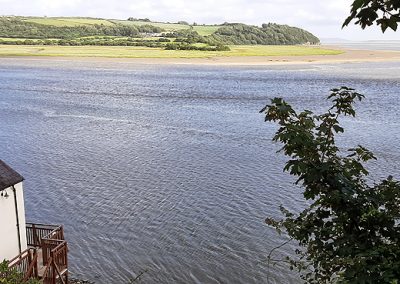 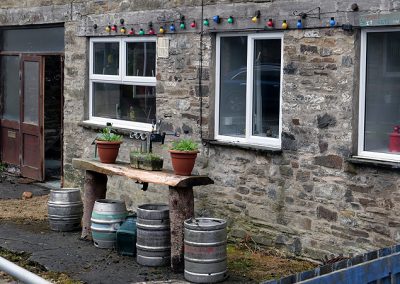 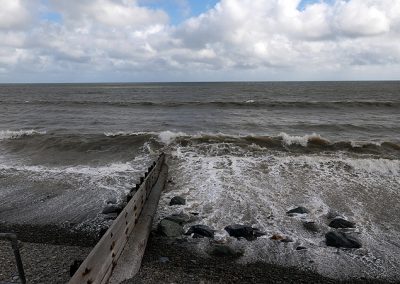 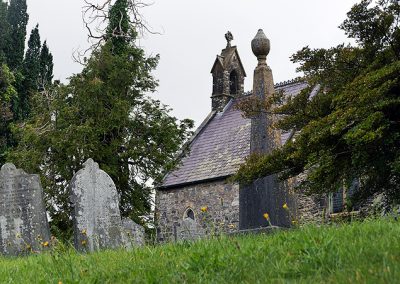 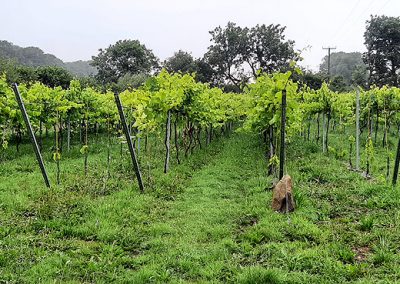 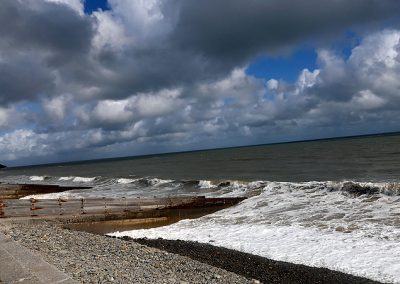 The Sea at Amroth

I drank my first bottle of Welsh wine chez Richard, looking down from his terrace over the battered greenhouse and the jungle below his garden, behind that the railway that runs from Swansea out to the coast, and behind that the silhouette of the Gower pensinsula.

Unusually, it was a fine sunny day, and the greens and blues of the tidal lagoon were radiant. As Richard doesn’t have table or chairs on the terrace, we sat on the low jagged wall outside the study, bombarded by the occasional greengage.

The wine was a red called Triomphe, produced by the Ancre Hill Estate in 2013. I wouldn’t exactly call it a triumph, but it certainly wasn’t bad. We bought the wine from an off licence called the Maes-Y-Lili Vintry in Cross Hands. The vintry has a rather dilapidated look, but it was well stocked and we spotted a sign that suggested it has been in business since 1936. The name means Lily Field. The person who ran it was helpful but a man of few words. There were only two bottles of Welsh wine in the whole store, both red, so we bought both – the Triomphe for £23 and the other wine (Gwin Coch) for around £18.

Very light bodied, slightly petillant, rather tart as you would expect, it had interesting flavours of sherbet, raspberry and toast. The colour was interesting too, a rather cloudy blue-tinged red, which made me think of the rain and mist that usually hangs over the Gower. After a glass or two, we decided to save the rest of the bottle for tomorrow.

Earlier, we drove over to Burry Port and had one of the best Fish & Chips I have tasted. Ever. From a rather plain chippy just down from the station. They were very friendly, and gave me a small tub of vinegar when I said that I didn’t know if my friend wanted it on his chips! 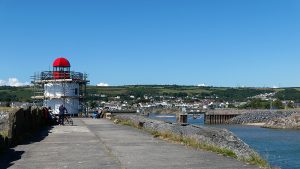 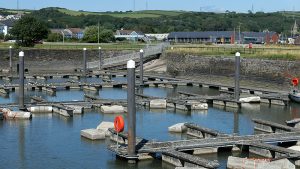 We ate on a bench overlooking the sea, baking hot sunshine, and then went on a short walk to the lighthouse on the other side of the inlet.

Fantastic day. After a lateish breakfast of croissants and ginger marmalade, we drove to Carmarthen. After the sunshine of our first day, the weather had turned rainy. The rain, as Richard described it, is “penetrating” and we were “drizzled” on relentlessly. We took refuge in a small gallery with some excellent paintings by a still-alive artist called Charles Burton. He paints intimate domestic / family scenes such as his daughter, or his tabby cat, but with weird plays on the perspective; also some moving war paintings and sketches, the haunted face of a tommy wearing a steel army hat, and ambulance-men helping casualties. Landscapes with foggy blank houses, or industrial facilities, that give you a feeling of the Rhondda as rather timeless and dour.

We went round the “free” bookshop, a favourite spot, ramshackle with bric-a-brac downstairs, and bookshelves groaning with weighty tomes upstairs, but all higgledy-piggledy, so that you have an erotica section nearby accounting and finance, and the sciences grouped together but then a shelf on geology marooned among the travel books. I love the place, we browsed for about an hour and came away with some treasures.

We bought lunch at a deli on the High Street, then drove out in the rain towards Narberth, which is the main town around which the vineyards are scattered. Before we got there, we turned off to Whitland, and we found a picnic spot opposite St Mary’s Church, just above a river that looked very swimmable, although not really the weather for it. Richard asked some workers under the bridge whether there were otters in the river, and one of the women said that she thought there were, and that she had also seen kingfishers. We tried to get into the church but it was locked.

After consulting some maps, we drove back north over the A road, and then down endless tiny country lanes that reminded me of Dorset, and located a number of vineyards. The highlight was the Hebron vineyard, although we also found Jabajak and Cwm Deri. I have written about these in my blog on wine trips, but here is the link to Hebron vineyard.

A lovely meal in the evening. We had a defrosted ham (Richard has been having problems with his freezer, and has someone coming round early tomorrow, hopefully to fix it) with a broth made from celery, fennel, peppercorns and fennel seeds.

Well, that’s about it for now. I have been sleeping in my sleeping-bag, and sleeping quite well. I wake up around 6 am and take in the view of the Gower peninsula for a few minutes. I’m not sure that we have a plan for today, but there are still plenty of vineyards to try, and maybe going up into the Black Mountains if the wind isn’t too much of a problem. The forecast, however, is for heavy winds. This morning at dawn I could see big waves raking in over the tidal lagoon between us and the Gower, “white horses” as my father used to call them.

Another nice day, and despite dire weather warnings it was pretty dry and sunny most of the time, although strong gusts through the day. We drove out to Llanstefan which has a lovely 12th C castle overlooking the sea, with views all the way over to the Gower. Then we went on to Laucharne via St Clears. The church there is beautiful, with tombstones shaded by high trees, and Richard got talking with someone involved with “The Corporation” which sounds like a cross between Trading Standards and the local Mafia. Actually a delightful chap, who talked with great knowledge about the history of the place. We walked out to where Dylan Thomas is buried with his partner, and then into town where sadly, the town bookshop has closed. We looked around the atmospheric castle, then went onto to the cliffs where Dylan Thomas’ work hut is located. We ended up in a village with a decent pub and amazing views over the sea, very big waves so swimming was out of the question, but still nice to be by the sea.

After dinner, we went down the Colliers Arms again. This tiny pub in Pwll has a great atmosphere, although who knows if it will survive the pandemic. I got to know the editors of the Cabbage Patch quarterly, a wonderfully quirky newsletter which is full of amusing trivia.

We drove back to Lewes on a day of filthy weather, and it took 7.5 hours in total, of which almost seven hours was continuous driving. We stopped only briefly in Marlborough, a very nice town with some good bookshops, then around Winchester and back along the A272. A lovely drive but quite tiring.