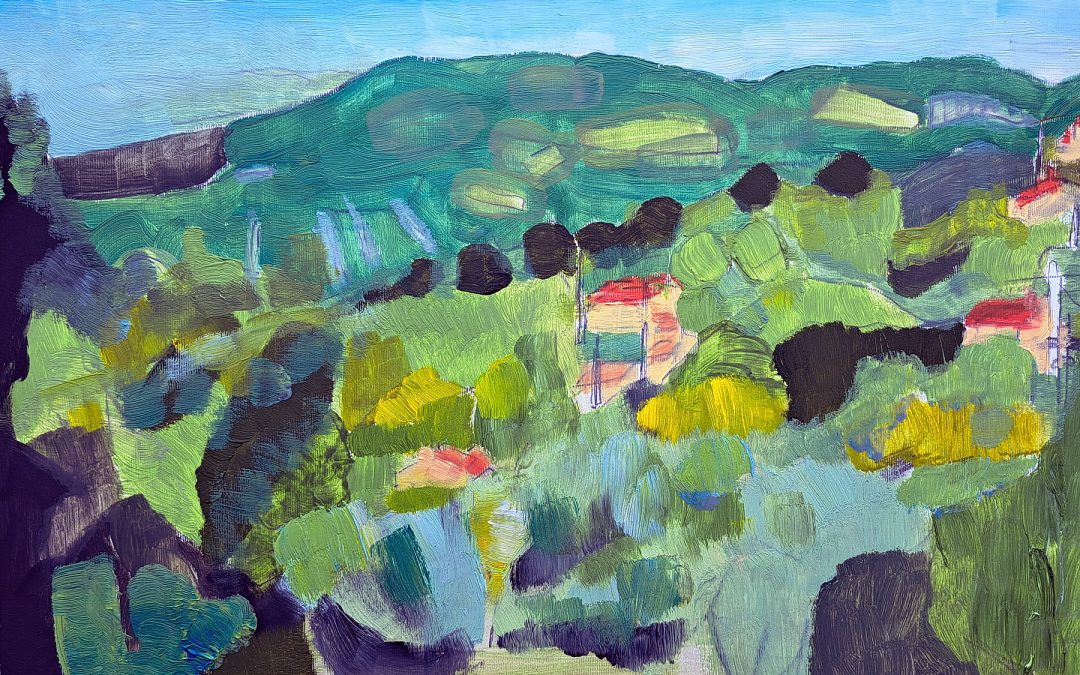 I have been painting, ce que me rend tres heureux.

It has turned out to be quite an artistic holiday. I had several painting on the go, which took an age to dry. First, the Mazet and the olive trees by the pool; then the view up to the villa from the bottom of the garden; then a sketch of Luke on sun-lounger by the pool; and then two biggish paintings, one of the view from the terrace, and one of the large rocks by the swimming pool on the east side. Also found a new viewpoint of the pool and villa which inspired me to do some more sketches. Also did one of my shamanic paintings with some interesting shapes and contrasting colours and textures.

Emily and Luke also did good work. Emily painted a view of the pool and mazet from the sunbeds, at first rather sketchily, but then putting in interesting brushstrokes and layers of colour that gave it a real feeling of vibrancy. This would be worth framing, and she is keen to have it in her new flat in Birmingham. Luke also got started on oils for the first time, doing beautiful layers of blue and grey-green in the terrace view, although that’s still a work-in-progress. The problem with oils is always the drying time, so I used a drying agent in the paint, but even so I had to take them back with me and I will finish them from either memory or from photos.

My discovery this holiday was Naples yellow, which is almost exactly the same colour as used to be used in the glazes of St Jean de Fos pottery. It is such a lovely gentle colour. I bought the tube from the shop that is now L’Artisterie, along with Viridian Blue and a Sap Green that turned out to be identical with the tube I already have, so a complete waste of money. L’Artisterie is a bit pricey but has a very good selection, and generally the quality is not bad, although I was disappointed by some of their brushes.

Luke also did some great colour pencil sketches of the view, including a cubist version, and last night he began painting with oils, so far very successful with receding layers of well-balanced colours.

Jenny’s creativity took a more foodie turn, with a Salad Nicoise with beautifully cooked tuna steaks, which Luke announced the best he had ever had, and I have to agree; and then a delicious fig and goat’s cheese tart, which looked as good as it tasted.

We went down to Clermont l’Herault for the market on Wednesday, which was even better than I had remembered, many more stalls than Lodeve, and we came back with a new basket, sausages and aligot but sadly no books as the second-hand libraire was shut until mid September, so even next week we will miss it.

We have spotted a famous TV Chef there in the past(whose name I forget, and I just looked him up in the top 50 and he wasn’t even mentioned, so maybe not so famous) so it obviously has a bit of a foodie reputation.

As usual, visited the local cathedral. We have had amazing experiences of hearing the organ here, but in fact it was all quiet, so I just lit a candle for the ancestors and headed on. The cathedral has a rich history and has historically vied with Lodeve’s St Fulcran as the main influencer in the region.