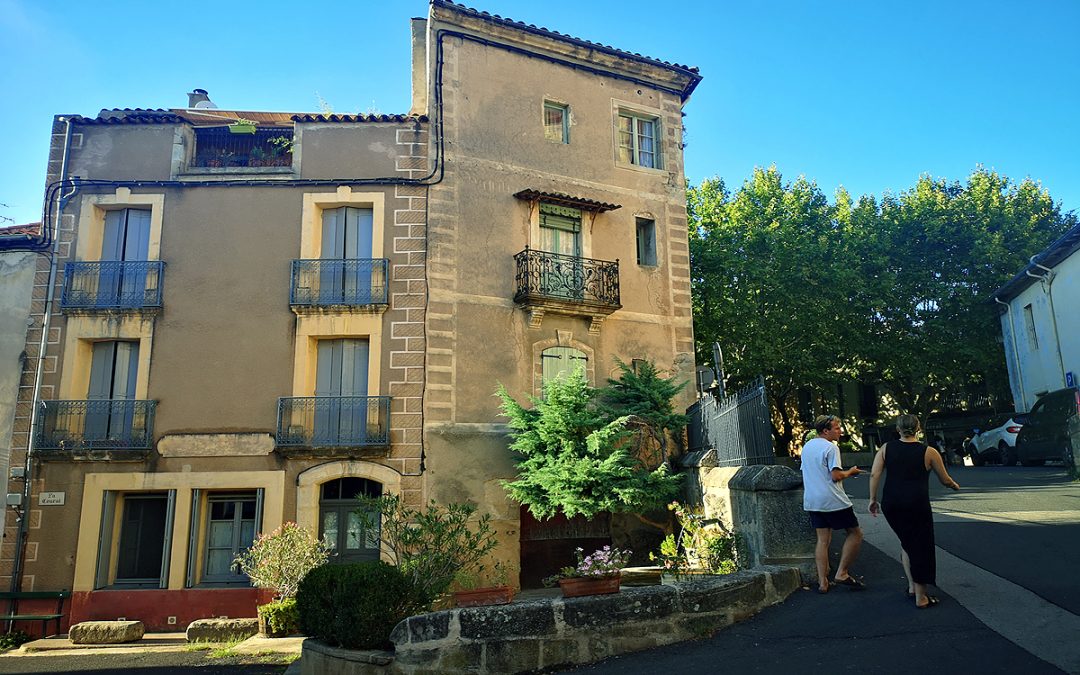 August is a big month for Soubes, with several festivals. Most of the time we arrive a bit too late for the summar festival, but lately they have added a Farmers Market tat satys open until the end of the month, and we were also there for the Fete de l’Aire, which is the parking area at the bottom of the village before the A25. Both turned out to be fun.

Back in Soubes after walking around Moureze, and the weekly farmers market was on. This has been a good addition, various food stalls and wine barrels are set up in the Place du Terral, and you can eat drink wine sous les platanes. The stalls sell vegetables, goats cheese and charcuterie, as well as the new local wine Massalarie, and there is a festive atmosphere, music and dancing.

We had a redemptive salad, fresh leaves and then a plate of goats cheese and the charcuterie, a nice dinner after the lunch that never was.

We weren’t sure what to expect of this. In the past, the late summer Fete has focussed on the seven Fountains around the village, and we had a particularly good experience trying local wines several years ago, around the streets behind the Chateau. The vineyards at the Chateau have now been converted into what is possibly the world’s most scenic parking lot.

We were directed to the Fete de l’Aire from the local bar, where we had a beer in paper cups. It turned out that the wine tasting had been and gone about half an hour before we arrived, but they were still selling the Pas de l’Escalette, and at a bargain price of € 12 per bottle, usually it is about € 20 per bottle.

Emily and Luke went off to order pizza, and we sat at the trestle tables that had been set up, with a two-piece band knocking out the songs on stage and a general air of bonhomie among the populace. The pizza were amazing, especially the trois fromages, and when we left at around 8 pm we bumped into some friends of Jim and Margaret who were surprised that we were leaving when the evening was still young.

From Salagou, we drove out to the Cirque de Moureze. We had been here many years ago, and although the parking had gone up in price by one euro (so a punitive € 3 for the day) not much else had changed.

The Cirque is one of the most stunning landscapes I’ve been in, somewhat ressembling Goreme in Turkey, but with vivid green everywhere from the pine trees. There are huge dolomitic rocks that tower above you and are sculpted into weird shapes by millennia of the blustery winds we’ve been experiencing locally, the Terral and Mistral. The pathway is very narrow and winding, but there is a great system of coloured bars painted on trees to outline the various paths to follow.

We took the easiest, marked yellow, which was supposed to be one hour but in fact took more than double that.

We set off wearing sandals and Skechers, no hat, and we just had a single flask of water, but we had expected a fairly easy walk, remembering that we had done this with the kids many years ago, when they were aged six and nine years old.

The journey out was up steep uneven stones that were mostly fairly easy to get over, although quite exhausting. Returning was even more challenging, a steep rocky descent and very easy to slip, especially wearing sandals. We met a couple on the way back and took their photo, and they told us there were several routes back but none of them easy! They were both elderly but nimble-looking in the way that French people often are, and they offered to help us get through the steeper descents on the way down. We said Thanks but No Thanks!

It was also extremely hot, so by the time we got to the end we were both fairly tired, and the sirop de framboises and Coca Cola tasted unbelievably nice. This was as at the same small bar that we had ended up in years ago with the kids, so it felt quite nostalgic. A small raku pottery nearby the café.