Soubes: View from the Terrasse 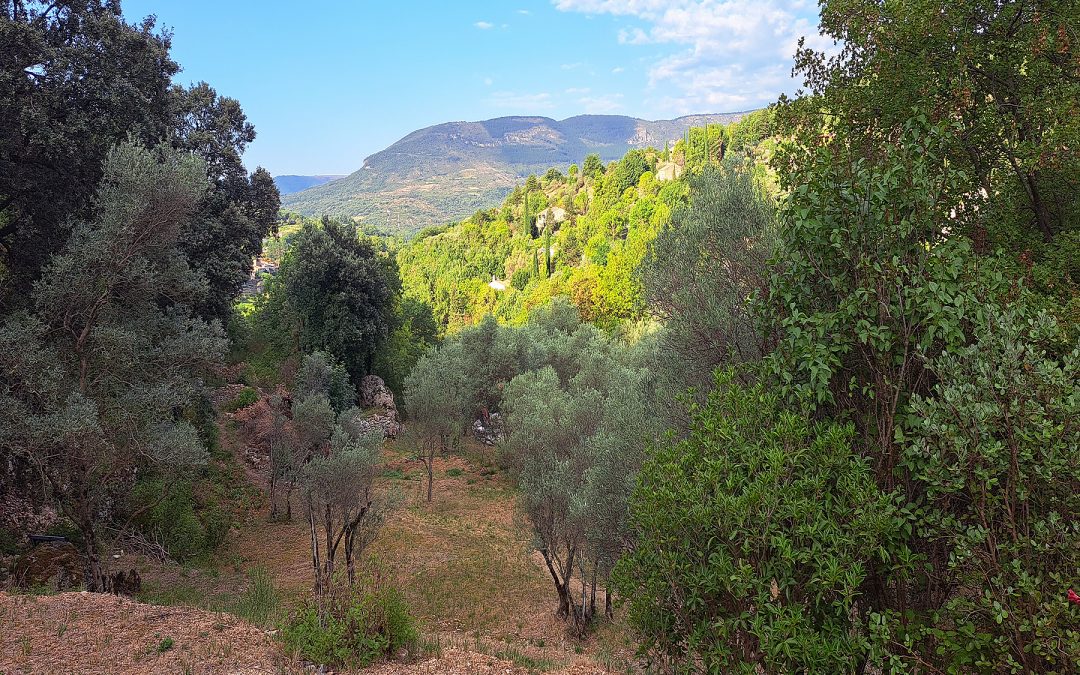 We woke up and had coffee on the terrasse with the familiar view of the village, and then the hill the other side of the motorway, and the rocky protuberance that always makes it into people’s paintings of the view.

It’s always such a nice feeling to wake up at Les Oliviers for the first time. The garden is full of olive trees, and every corner has something familiar: the blue bench after the spiral wooden steps with the big grey boulder next to the path, covered with moss and lichen, looking down over the pool; the dried stone walling that runs in two layers along the Chemin des Capitelles; the ruined Capitelle in the corner underneath the stone walling, which caved in after a heavy storm several years ago; the large rock at the bottom near the pool, which I tried to paint this time; and the various olive trees, some ancient and some still quite young.

The thing that most strikes me on the first day is how much the light changes. In the morning, the sun slants in from the east, above the dried stone walls and it lights up the whole of the valley opposite with an intense light, sometimes lime-yellow and sometimes more blue-green depending on the clouds, somehow it reminds me of a fruit bowl. Then as the day goes on, the sunlight gets brighter and bleaches out most of the colour, so you go through subtle shades of blue-green until finally it becomes almost like a dried out yellow-grey. Then in the afternoon, the sun goes round the other side and you get new waves of contour being washed into the olive trees, and the hills over the motorway (Mont Crezac) turn a deep washed out blue-grey, while the trees on the brow of the hill are a bright luminous sap green.

It would have been tempting to spend the morning by the pool, but as we had the market that day, I think we just had a quick dip and coffee before setting off for croissants.